What is a bill of lading? What is its purpose?

Most of our customers especially those shipping their vehicles or containers for the first time usually ask us this question at one stage or the other when container shipping or car shipping.  But what is a bill of lading? What is its purpose? A bill of lading is one of the most important document in the chain of chipping your container or vehicle.

What is Bill of Lading? 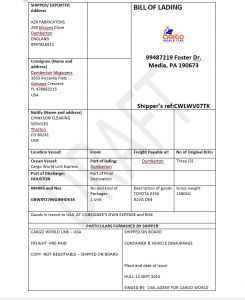 Bill of lading, ( commonly known as Bol or abbreviated as B/L) is a  detailed list of a ship’s cargo in the form of a receipt given by the master of the ship to the person consigning the goods.

A bill of lading is a record of traded goods which have been received on board. It is a document that establishes an agreement between a shipper and a transportation company for the transportation of goods. Transportation Company (carrier) issues these records to a shipper.

A bill of lading indicates the particular carrier through which the goods have been placed to their final destination, and the conditions for transporting the shipment to its final destination. Land, ocean/sea and air are the means used for bills of lading.

Purpose of  bill of lading

Bill of lading has 3 main purposes.

The B/L is the EVIDENCE of the contract of carriage entered into between the “Carrier” and the “Shipper or Cargo Owner” in order to carry out the transportation of the cargo as per the sales contract between the buyer and the seller.

Emphasis on the term “Receipt”.

3  Document of Title to the goods

Emphasis on the term “Title”

IMPORTANT  POINT TO NOTE ABOUT CONSIGNEE

That is why we always want our customers to make sure they are clear on what it means to put some’s name as consignee. Consignee becomes automatically the person entitled to have the vehicle registered in his or her name. Some customers especially those who do not have professional representatives to give them guidance end up confusing the person who can go to collect as vehicle from the port as  the consignee. We have dealt with many family conflicts as a result of this error. In most countries, the consignee becomes the registered keeper of the vehicle.

If you intend to have a vehicle registered in the name of a company, the bill of lading must state the name of the company as the consignee.

It is the responsibility of the shipper to make sure details on the bill of lading are correct. Some customer assume that it is the responsibility of the freight forwarder to make sure vehicle details such as the  registration number and  vehicle identification number (VIN) or commonly known as chassis number. These details must be exactly the same on the Bill of lading as is on the vehicle registration book (logbok). Any errors noted after closure of time to correct the details on the Bill of Lading, (manifest), usually incurs what is called a manifest corrector fee. This fees is paid by the shipper.  So to avoid any unnecesary expenses, care must be taken to double check that all details including the name and surname or company name of the consignee is correct. The name of the consignee must be exactly the same as indicated on the identify document of the consignee (this must include even the second name of the consignee if they have a second name on their identity documents)

If you are not sure about what to do when you get a draft copy of your bill of lading, please contact us for free impartial advice.

Types of bill of lading

Below are the descriptions of types of bill of lading:-

2. Order bill of lading is the bill that uses express words to make the bill negotiable. This means that delivery is to be made to the further order of the consignee using words such as “delivery to A Ltd. or to order or assigns

3. Bearer bill of lading is a bill which states that delivery shall be made to whosoever holds the bill. Such bill may be created explicitly or it is an order bill that fails to nominate the consignee whether in its original form or through an endorsement in blank. A bearer bill can be negotiated by physical delivery.

4. Surrender bill of lading works under a term ‘import documentary credit’, the bank releases the documents on receipt from the negotiating bank but the importer does not pay the bank until the maturity of the draft under the relative credit. This direct liability is called Surrender Bill of Lading. (SBL)

5. A clean bill of lading is one which states that the cargo has been loaded on board the ship in apparent good order and condition. Such a bill of lading will not bear a clause or notation which expressively declares a defective condition of goods and/or the packaging. The opposite term is a soiled bill of lading. It reflects that the goods were received by the carrier in anything but good condition.

How to Prepare and Ship a Car from UK Returning resident to Zimbabwe.

Road Safety tips over the holiday

7 Most common types of shipping containers used for international trade

How to Prepare and Ship a Car from UK

This website uses cookies to improve your experience while you navigate through the website. Out of these, the cookies that are categorized as necessary are stored on your browser as they are essential for the working of basic functionalities of the website. We also use third-party cookies that help us analyze and understand how you use this website. These cookies will be stored in your browser only with your consent. You also have the option to opt-out of these cookies. But opting out of some of these cookies may affect your browsing experience.
Necessary Always Enabled

Any cookies that may not be particularly necessary for the website to function and is used specifically to collect user personal data via analytics, ads, other embedded contents are termed as non-necessary cookies. It is mandatory to procure user consent prior to running these cookies on your website.